Please ensure Javascript is enabled for purposes of website accessibility

Cover Crops, or the start of the Organic Farming Cycle 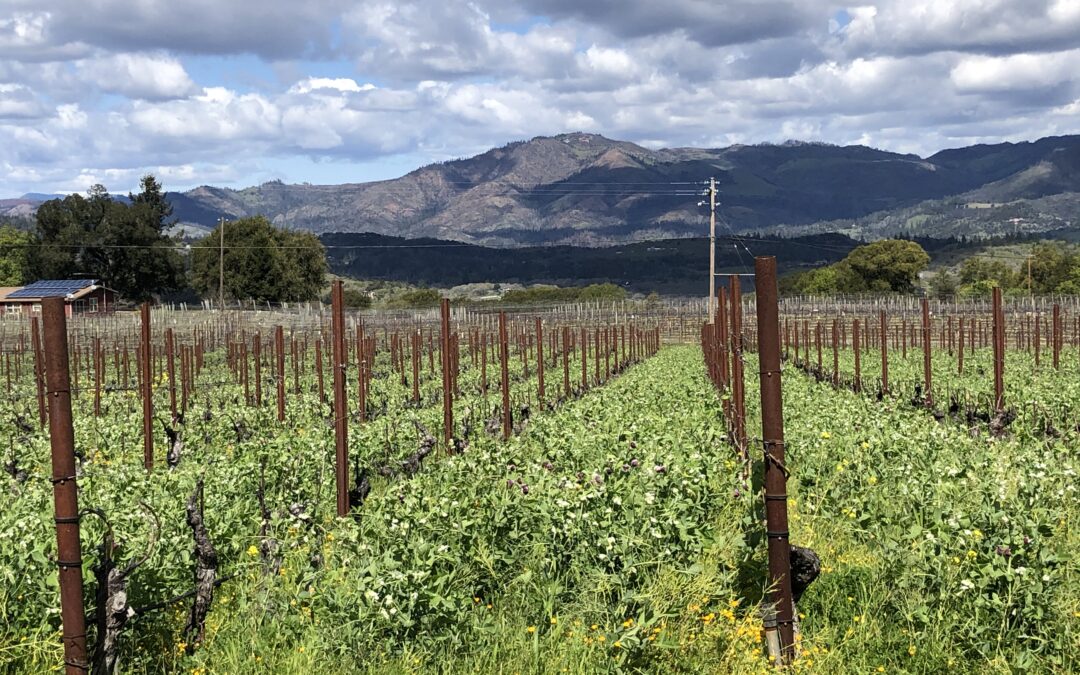 You could say that once harvest ends, the organic farming cycle begins. Almost as soon as the last grapes are picked, the grape vines enter a period of extended dormancy. After working hard for months to ripen their precious crop, the grapevines more or less go into an exhausted sleep – a sleep that lasts from approximately November to March in Northern California. During that time, the vines are mostly impervious to frost and floods.

Organic grape growing is more than just avoiding the use of synthetic pesticides and fertilizers.

Perhaps most important to the practice is the cover crop, which addresses the vineyard’s fertility needs. When the grapevines start their hibernation, we sow the seeds for the cover crop. However, the decision of what seeds to plant is determined months before. Over the summer, when the vines are in full bloom, we conduct tests on the stems of the leaves, or the petiole. This tells us what the vines are actually taking up from the soil. The results of these tests inform our choices for the next year’s cover crop. If the grapevines already have lots of Nitrogen, we use less peas and beans. For 2023, among other things, we planted Phacelia seed, a Nitrogen sink. Phacelia takes nitrogen out of the soil which helps to reduces vigor in the grapevine canopy. A less vigorous canopy allows more sunlight to penetrate, which in turn helps to reduce mildew pressure. In years such as this, where extended winter rains will mean there will be alot of moisture in the soil during the growing season, reducing vigor is a particular concern. If the grapevines get more water than they absolutely need, the grapes they grow will be watery and not very flavorful.

We sow the seeds for the cover crop in the late fall, usually November. This gives the seeds a chance to germinate ahead of the winter rains. The young plants then additionally provide protection against erosion during the Northern California rainy season. Cover crops are planted in the fall and tilled into the soil in the spring, when the vines wake up from their winter sleep. Tilling the plants delivers a fertilization technique known as “green manuring” – a slow release of important nutrients during the dry months of summer as the plants decompose – thus acting as fertilizer or manure for the vines. Cover crops include a variety of grasses, legumes and mustards that fix nitrogen in the soil and offer a habitat for many beneficial insects.  Over a period of years, the benefit of regularly planting a cover crop becomes apparent in the health of the grapevines and the tilth, or health, of the soil.

In November of 2022, we sowed the following seeds between the vine rows at Laurel Glen Vineyard.: Magnus peas, Cayuse oats, Triticale, Phacelia, and Daikon radish every other row. These seeds are growing into our 2023 cover crop. But we did not stop there. We have gone

one step further this year and planted insectaries between a few of the vine rows. All the seeds planted in the insectary rows are known to attract pollinators and beneficial predatory insects (i.e. insects that prey on the leaf-hoppers and mites known to carry diseases that can negatively affect grapevines.) Some examples of insectary plants are Persian Clover, Coriander, Baby’s Breath, California Poppy, and White Yarrow.

Before the introduction of agricultural chemicals in the 1930’s, all grape growing and food production was in essence organic. Laurel Glen Vineyard was founded in the 1970’s by a Scot, namely Patrick Campbell. True to his heritage, he used expensive synthetic pesticides and fertilizers very sparingly. When Patrick sold to Bettina Sichel in 2011 and she started the conversion to organic farming, the soils were already in good health. The process to achieve CCOF (California Certified Organic Farmers) Certification takes a minimum of 3 years. For vineyards where the soils have been depleted of nutrients from extended chemical use the process can take much longer. Laurel Glen Vineyard achieved CCOF certification in the minimum amount of time, thanks to Patrick and his thrifty ways.